Oushak carpets originated in 15th-century Turkey, named after the town where these wool carpets were first woven. Oushak (sometimes referred to as “Ushak”) carpets employ a particular design sensibility, such as repeating patterns of stars or medallions, but they became popular because of the way they’ve faded.

Natural fading occurs when a rug is exposed to sunlight — even artificial light from fluorescent lamps can hasten the fading process in your rugs. In addition, fumes from chemicals found in cosmetics, air fresheners, insecticides, perfumes, and household cleaning products can accelerate this fading. Sometimes, the effect is pleasant. After all, who doesn’t want an antique 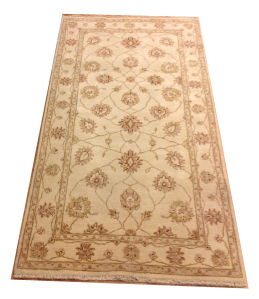 Oushak carpets are distinctive because of their washed-out look. Oushaks were usually dyed with natural red colorings that tend to fade more than blues, greens, and black dyes. The smaller molecules in the red pigment — more susceptible to the ozone in the atmosphere — end up over time looking more like coral.

After centuries of gracing floors around the world, a true Oushak naturally looks faded. Since wool rugs fade an average of 4-to-8 percent each year, you can imagine what a true antique might look like after centuries of fading.

An Oushak carpet is meant to look like an antique, even if it’s fresh off the loom — or directly from the 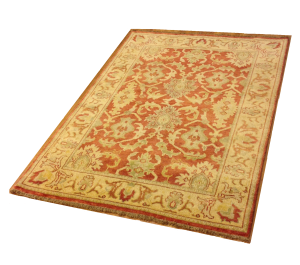 This handknotted rug has the traditional design associated with an Oushak rug. Because of te quality of its construction, you can bet on this rug surviving several generations!

factory machines. Modern hand-knotted rugs use wool that’s dyed a light, subtle color so that the fading looks as if it were created from years of exposure. The final appearance mimics the original. These new carpets give your home a warm, inviting, lived-in look without the tatters and tears of a real antique. They are as durable as any hand-knotted rug, meaning you should expect them to last for generations.

The look has become so popular that weavers in Persia and India have developed a mild washing technique to give their rugs that slightly used appearance. As the colors in their carpets naturally mellow unevenly, the numerous washings leech some of the original dyes to recreate the Oushak look.

Hand-tufted crafters employ similar techniques. Unlike the hand-knotted versions, however, the faded wool used in a hand-tufted piece is uniform, so the overall appearance tends to look more worn than naturally faded. As a result, very few hand-tufted manufacturers create Oushak rugs because the finished product comes off as obviously fake.

Karastan does a good job of producing the worn look of an Oushak. This design from Karastan is one of the many designs from Karastan available at Rug & Home.

Machine rug manufacturers, on the other hand, have done a much better job of recreating the Oushak look. With synthetic dyes and thin, uniform naps, the rugs can pull off the reproduction. Up close, a rug aficionado will be able to determine that your rug is synthetic and not authentic, but you can still capture the feeling of the ancient rug-makers and their generational art in certain machine-made products.

To learn more about the value and beauty of Oushak carpets, come in to one of our Rug & Home locations and ask one of our consultants. An Oushak gives any room a depth of artistic respectability. It can grace a room filled with antique heirlooms or compliment a room with more modern décor. All while nodding in homage to the ancient masters of its craft.